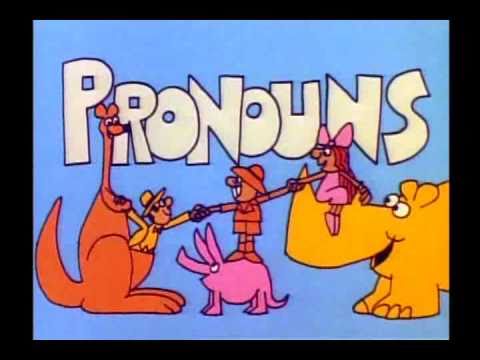 Let’s talk about pronouns; specifically, personal and possessive pronouns.
It’s nearly impossible to write a story without them. These are words that substitute for names or other proper nouns and for their possessive forms, respectively.

Personal pronouns. The person you’re talking about is one of these:

But the word you’re using is one of these:

And here’s an example of a personal pronoun in use:

Belinda loves to dance even though she isn’t very graceful.

Possessive pronouns. You’re talking about an object that could be described with one of these words:

Christopher’s, writers’, the readers’, Korey’s, Belinda’s, the car’s, the Inklings’

But the word you’re using instead is one of these:

And here’s an example of a personal pronoun in use:

Korey has to pick up his sister from school today.

You can see how prose would get very tiring without any pronouns, right? It would get cluttered with proper names and placeholders and the like. Pronouns make language prettier. But they are also a cause of common mistakes. For example:

Dan needed to talk to Hector before he went to the movie.

In many situations like this, it’s possible to figure out the meaning from context, from the things that were said in the sentences before and after this one. That’s not good enough—you don’t want your readers to have to waste time on figuring out what you’re saying when they should be busy trying to figure out what’s going to happen next.

Keep an eye out for sentences like that, where it is unclear to whom the pronoun refers (it's called an unclear antecedent, by the way). When you come across one, rewrite it so that the confusion is removed. Our example sentence above could be easily fixed:

Dan wanted to get to the movie, but he needed to talk to Hector first.

Hector was headed to the movies, but Dan needed to talk to him first.

See? Easy fix. Sometimes it won’t be so easy, but it will always be possible. You’re a writer—you have complete control over the story and the prose, so use it well.

There are other ways for personal and possessive pronouns to go wrong, so stay tuned for more tips on this in future posts.
Posted by Christopher Baxter at 11:34 AM

I’ve seen an excellent graphic floating around the internet that I wanted to share with all of you: This graphic was made by Gabr...

Do you have a paragraph that you just can't get right? Is there an element of writing that you'd like to hear about? Send an e-mail to storypolisher@gmail.com, and I'll see about putting together a post that will help you out.